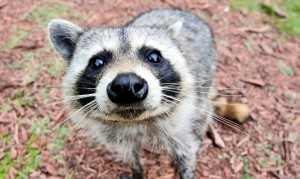 "When I found the virus with the same genetic signatures in raccoons from Maine to Florida, that was the first indication that these weren't isolated spillover events, and that the virus was widespread in raccoon populations," says Andrew Allison. (Credit: Paxson Woebler/Flickr)

When canine parvovirus first emerged in 1978, it started a global pandemic that’s thought to have killed hundreds of thousands of dogs.

Since then, the virus has occasionally shown up in wild animals, but these were considered a result of small-scale spillovers from dog populations.

A new study shows that many wild carnivores actually carry the virus, and that it is relatively easy for a parvovirus from a wild carnivore to adapt to life in a dog and vice versa.

“This is the first systematic study to investigate which carnivore species in the wild are infected with canine parvovirus and how prevalent it may be,” says Andrew Allison, a postdoctoral associate at the Baker Institute for Animal Health in the College of Veterinary Medicine at Cornell University.

“Surprisingly, it was everywhere we looked.”

Colin Parrish’s lab at Cornell has worked on canine parvovirus since it first emerged, and he and Allison became involved in wildlife infections after a 2007 outbreak of canine parvovirus killed several raccoons at a wildlife rehabilitation facility in Fairfax County, Virginia.

Until then, it was not known that raccoons could be infected with the virus, but when they and their colleagues began to investigate, they found outbreaks at wildlife rehabilitation shelters all over the country.

“When I found the virus with the same genetic signatures in raccoons from Maine to Florida, that was the first indication that these weren’t isolated spillover events, and that the virus was widespread in raccoon populations,” Allison says.

Allison, Parrish and their colleagues tested samples from 852 wild carnivores from all over the United States, and they detected genetic sequences of the virus in 24 percent of coyotes, 19 percent of raccoons, and 67 percent of pumas. Their findings appear in PLOS Pathogens.

What’s more, the genetic sequences of the viruses reveal that viruses from one type of host were closely related to one another, a strong indication of sustained ongoing transmission in certain species like coyotes and raccoons, and that they are natural hosts for the viruses.

There were more clues about how the virus moves from animal to animal, Allison says. “Although these defined groups of related viruses in a single wild carnivore species tell you that the virus is likely being maintained in such wild species, there was also a tremendous amount of mixing between strains from wild and domestic animals,” he says.

“There is likely extensive back-and-forth movement of the viruses not only between different wild carnivore species, but also between wild and domestic species, so trying to determine the pathways of transmission from an epidemiological standpoint is quite difficult.”

Tests in tissue culture showed that many of these wildlife strains of canine parvovirus were unable to infect dogs, but the team suspected that since they were genetically very similar, it might be possible for a wildlife strain to adapt to life in a dog. They tested the hypothesis in the lab by growing different viruses in dog cell tissue cultures and tracking changes in the viruses over time.

“Those experiments showed that the virus is able to adapt to a new host very quickly and that adaptation is occurring all the time,” Parrish says.

Transmission from raccoons to dogs would appear to be particularly easy, says Allison, because it required only a single mutation in a raccoon-adapted virus to make it infectious for dogs.

This changes the possible transmission and outbreak scenarios, he says, and instead of seeing canine parvovirus as a dog disease that occasionally spills over into raccoons, we should also be aware that the virus is capable of spreading from raccoons to dogs.

“It’s pretty clear that some of these viruses are moving between wildlife and dogs,” Parrish says.

The fact that canine parvovirus is so prevalent among wild carnivores also shines new light on how the virus might have first emerged in the 1970s, Allison says. Since it’s closely related to feline panleukopenia virus, scientists have long presumed that canine parvovirus must have crossed over from domestic cats into dogs, adapted, and triggered the pandemic.

“The widespread nature of canine parvovirus in many different carnivore species and its ability to readily adapt to a new host suggest that canine parvovirus may have originated from wild carnivores before jumping into dogs,” says Allison.

SAN FRANCISCO (AP) — A carpenter has been fired for freeing a raccoon that had been trapped by exterminators at the San Francisco construction site where he worked.

Todd Sutton tells the San Francisco Chronicle (http://bit.ly/1x8xudK ) that he came to work one morning in late February and saw the animal inside a trap.

The builders had hired professional trappers to have the critter — which was blamed for damage at the $610 million project — removed and euthanized.

But the 49-year-old carpenter says he put the animal in his truck and released it in a nearby grassy area, after getting guidance from animal control officers.

His employer told the newspaper the move amounted to theft, because Sutton took something from the site that didn’t belong to him.

Sutton has hired an attorney.

Source: CBS Denver
EVERGREEN, Colo. (CBS4)– Foxes and skunks are taking advantage of a good situation in Evergreen
CBS4 YouReporter Rob S. from Evergreen sent in that shows the two animals getting along.
During the day magpies make a mess of his bird feeder that’s suspended about 10 feet off the ground.
The foxes and skunks don’t necessarily dislike one another but they usually aren’t seen this close in proximity to one another. In this case they don’t really seem interested in what the other is doing.
Read full story here